They say everything is bigger in Texas, and that was most certainly the case last weekend at the Naturally Fit Games in Austin, when vegan athletes took the stage to represent compassion in action. The vegan muscle was bigger and better than ever with a team of nearly 40 vegan athletes who competed in a variety of different sports disciplines as part of the PlantBuilt Vegan Athlete Team, co-founded by two of my best friends, Giacomo Marchese and Dani Taylor. The PlantBuilt team not only competed, they brought home lots of medals, awards, and even set a world record. The team was formed in 2013 with just over a dozen competitors, and now it has tripled in size with aims of growing even bigger for their return to competition in 2019.

The PlantBuilt team comes together once every two years (after being annual from 2013-2015) to represent the compassionate vegan lifestyle in athletics at the large-scale Naturally Fit Games in Austin, which attracts athletes from around the world to compete in sports events including bodybuilding, powerlifting, CrossFit, arm wrestling, martial arts, Olympic lifting, kettlebell, and more. Thousands are on hand to witness the action, including the World’s Strongest Man, Mark Henry, whom I was excited to meet last Saturday.

So, how did the PlantBuilt team do this year? Like a broom and a dustpan, they cleaned up. The team of 39 competitors won 32 medals, including 22 first place medals! PlantBuilt co-founder Giacomo Marchese walked away with two 1st place awards in powerlifting, Korin Sutton won the overall men’s bodybuilding title, Natalie Matthews won the overall bikini title, and Sara Lee set a new world record in kettlebell lifting. Crystal Moulton, Sara Russert, and Ndem Nkem all brought home 1st place medals in powerlifting (which is where I spent most of my time at the Naturally Fit Games as a volunteer photographer and an avid cheerleader for the team). Forest Crosbie won the overall novice physique competition in his very first contest, and his training partner, Derek Tresize, came in 2nd in the Pro division. I trained with Forest on the Vegan Caribbean Cruise just a few months ago, and it was a pleasure to see him shine in his contest debut. My good friend, Simone Collins, who traveled all the way from Australia, won the open figure title for yet another 1st place award for team PlantBuilt. Paola Deocampo won a first place award for PlantBuilt in bikini, and the awards continued to pile up for the Vegan Athlete Team all morning, afternoon, and evening at the Austin Convention Center.

Dani, a figure champion at this event in the past, sat out this competition to coach other competitors on the team, as did Jason Morris, Chad Byers, and numerous other PlantBuilt Alumni. I even came out of retirement to compete for Plantbuilt once upon a time during a previous trip to Austin. Luke Tan came all the way from Singapore to compete in CrossFit. Ed Bauer, a staple member of the PlantBuilt Team, competed in his 3rd different sport for the team, in Olympic Lifting (after having been a runner-up in physique and a CrossFit competitor in previous years). Mindy Collette, the cover model for my book Shred It!, was also in action in the fitness model category. My friend, Geoff Palmer, creator and CEO of Clean Machine, finished runner-up in bodybuilding (though I really think he should have won 1st place), and overall, the team shined across the board.

Sara Lee’s world record in kettlebell (photo above) will likely headline social media posts for a while, as well as the PlantBuilt team’s overall success. Giacomo and Dani have built something truly special with the PlantBuilt Vegan Athlete Team, but they will be the first to say that it isn’t about them. And they’re sincere, and they’re right. For Giacomo and Dani, building a vegan athlete team to compete in mainstream athletic competitions alongside those on a standard omnivorous diet, has always been about standing up for animals. The better the PlantBuilt team does, the stronger and louder the statement it makes for a compassionate vegan lifestyle combined with athletics. PlantBuilt has become accustomed to winning and cementing themselves as game-changers in the sports industry. The 2017 Naturally Fit Games were no different, except the PlantBuilt team won even more awards this time around with their largest team to date.

I’m back home from Austin, filled with enthusiasm and rejuvenated optimism about the impact that vegan athletes have on mainstream culture as a result of their success in athletics. I’ve been posting photos on social media, but for the best collections of images, follow PlantBuilt on social media. Simply search for “PlantBuilt” on every social media platform you use, and you should find a great collection of images, stories, recaps, and articles from last weekend’s successful performances.

I’m heading out to North Carolina this weekend for the Asheville VeganFest. I hope to see many of you there. I’ll follow up soon with some details about some No Meat No Problem clothing sales we will be offering soon. We appreciate your ongoing support of our brand. Every product ordered means a lot and helps us spread awareness, grow our brand, and expand our outreach.

For more information about the PlantBuilt Vegan Athlete Team, check out a couple of other news stories already published by VegNews and PlantBasedNews, and visit PlantBuilt.com to view the entire team roster and competition results.

Have an awesome rest of your week! 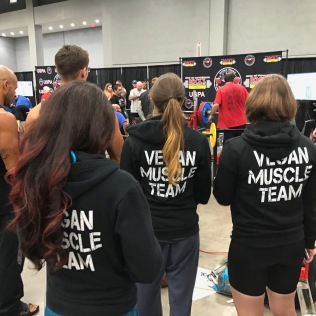 me with Mark Henry 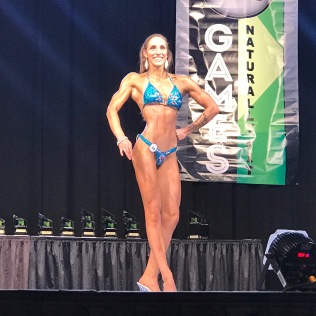 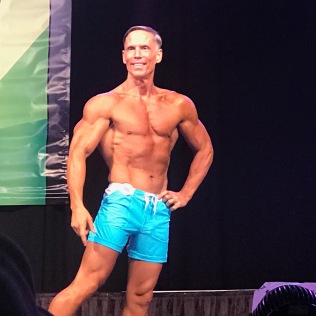